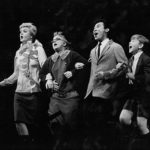 If you don’t know, the 1958 movie Auntie Mame by Rosalind Russell is one of my favorites of all time.  There’s also the 1966 Broadway Musical Mame which starred the incomparable Angela Lansbury.  (There is also a 1972 musical movie version of Mame that stars Lucille Ball, which I’m told is great – but it’s hard for me to watch because of my love for Ms. Russell’s version).

Either way – it was the Broadway version of Mame that first brought us “We Need A Little Christmas” – a song I also love.

Mame has just lost her entire fortune in the Wall Street crash of 1929.  She has no way to provide for herself or her young nephew Patrick, or her faithful household help – her own little family.  Things are the bleakest they have been, with no hope of change any time soon.  Mame declares they “need a little Christmas” even though it’s several weeks too early – and insists they all open their Christmas presents right then.

The tune itself is deceptively cheery – and when I first heard it – I had no idea of the deeper meaning behind it. The forced gaiety, the permission to laugh and smile for just a while, to shake off the burden and stress of the moment – knowing there was still a hard road ahead – strikes a little close today.

But the burden of this new reality is exhausting. We will break our own spirits before anyone else does if we don’t give ourselves permission to find joy amid the rubble.  Maybe not even joy – just time to renew and rebuild so we have strength to carry on.

1 thought on “We Need A Little Christmas?”