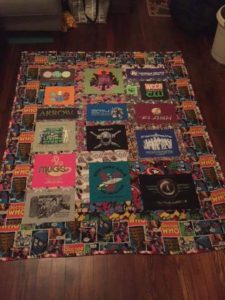 The quilt was an idea I had several years ago.  To get t-shirts from past Geek Galas, along with from some of our sponsors, and put them together as an auction item to help raise money for the event.

It took a while to get it together – to gather enough shirts, to find someone to quilt it, to get it done in time for the Gala.  I had been talking about it for a while, and I know that some folks started to lose faith in it ever getting done – because sometimes projects are just pipe dreams you talk about but never do.

But this year was the year.  I’d found someone willing to help me, I had piles of t-shirts from various movies, films, tv shows, and sponsors.  Donna (my quilter extraordinaire) and I had set a date to meet up so I could hand over the 2 bags of options, and she could get started.

Donna dropped the quilt back off to me a few days before the Gala.  As my hands passed over all the beautiful stitching, and all the shirts with their memories, I knew I wanted to keep it.  But this was for the Gala, and I had strict rules about stuff for the Gala.  Anything someone hands me for the Gala never belongs to me.  I don’t bid on things, I don’t buy raffle tickets, I would never want to do anything that would make people feel like they couldn’t bid against me or that I had rigged the raffle.  It’s just not okay.   People are so kind and generous with their donations for the Gala, it wouldn’t be right for me to keep it and not have it go where it is intended.

On the night of the auction, I gave the emcee the list of descriptions and the order of the auction, making sure the quilt was last. I busied myself and ensured we had the card machine ready to process the payments as pieces were bid on.

When the quilt came up for auction, it made me glad to hear some of the “oohs” and “aahs.”  It seemed like 40 hands immediately went up to start the bidding.  The emcee chuckled and just started going up by fives until eventually just a few hands were left.   I tried to focus on processing payments – I didn’t want to see who was lucky enough to take my prized project home.

Finally, the bidding stopped – it had brought in over double what any other piece had earned. I looked up from my tablet to see 3 of my dear friends in front of me.  “We need to split this 3 ways – we bought this for you.”

Another friend, hearing the good news, told the emcee what had happened.  I tried to wipe the tears from my face as he relayed the news to the crowd.  I covered my face with hands again, and opened them to see a group of folks standing up and clapping in excitement for me.  I cried some more.  I’m even crying some now as I type this. It was one of the most precious moments of my life.

I was later told that the other group bidding on the quilt had planned to give it to me as well. Which made me cry some more.   I had my friend Tiffles take the quilt home with her that night – she was one of the 3 bidders along with LC and KSmiles – and I wanted to make sure nothing happened to it.

Tiffles brought it back over to me last night.  It made me so happy when I saw it.  I didn’t even take it out of the plastic protector I had originally placed it in – I wanted to wait and just make the moment last.

This quilt, this amazing quilt, is just a thing.  But the love and kindness and the friendship that are now stitched in to it by the generous people that fill my life – that is what it means to me now.  And I’ll probably cry about it some more.  And that is okay.

4 thoughts on “The Quilt”