This weekend, SH and I went with a group of our friends 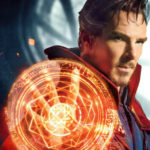 to see Marvel’s Doctor Strange.   Don’t worry – I’m not going to spoil the movie in any way – but I did want to talk about just one aspect of it.

Stephen Strange is a doctor – a brilliant neurosurgeon with all the cockiness that often accompanies brilliance.  He is precise, impeccable, seemingly impervious to error.  And then that is taken away from him and he has to start again.  (See not spoiled – just summarized.)

As his life changes, people keep asking him his name – calling him Mr. Strange, Master Strange, Stephen. One person even says he can no longer be called Doctor Strange, because he’s no longer able to do surgery.

At a key moment, he explodes:  “I am Doctor Strange.  Not Mister, Not Master . . .”  He goes on to talk about who he was then, what he learned while a doctor, is part of what it took to make him what he is now.

SH and I often talk about how what we went through in our past is what led us to each other.  One change, and we might never have wound up together.  The things I studied in college, the jobs I took in my past, the people I knew and surrounded myself with – all these things, no matter how successful or unsuccessful, made me who I am now.

Sometimes, it’s easier to ignore who we were.  Perhaps it embarasses or saddens us.  Perhaps it makes us regret things. But the more important thing is that we learn from it, use it as we move forward, and make our world better because of it.

And then, as the Ancient One points out, remember – it isn’t always about you.